This  is a deeply personal post originally written for the blog maintained by my employer, Camp Tawonga.

After nearly a decade of being a part of the full-time Tawonga team, it’s time for me to say goodbye. Leaving Tawonga is bittersweet – working here is a dream come true and an amazing experience each and every day. However, as my three little girls grow up before my eyes, I feel now that I need to be with them on a more regular basis. 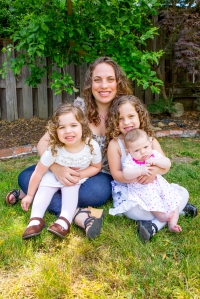 I’ll never forget the moment during my first year on Camp Tawonga’s summer staff when a member of the senior leadership team said to me, “You’re a Tawonga lifer. I see it in you.” How true that statement was. My first time setting foot on Tawonga’s property was the summer of 1993. My parents put me on the bus to camp for the first time, sight unseen. I boarded the bus without a friend and looked out the window to see my dad giving me a thumbs up and my mom fighting back tears as she gave a brave wave.

I boarded the bus to camp for the next four subsequent summers as a camper and another four throughout college as a summer staff member. Tawonga shaped me in more ways than I can count. I had many firsts there – first backpacking trip, first time I felt connected to Judaism, first kiss. I developed deep, lasting friendships while up in the Sierras. I moved to the Bay Area after college because that’s where my camp friends lived. I joined Jdate (where I met my husband 10 years ago) because of the Jewish identity I formulated at Tawonga. One choice, one decision – Tawonga – has shaped so much of who I have become.

Read the rest of this post by clicking here.