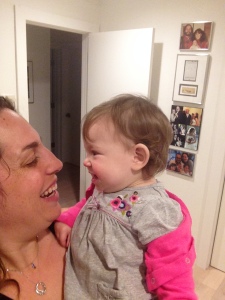 One of my favorite sounds when I wake up (nope, strike that, when I am woken up) in the morning is hearing my nine month old baby babble in her crib, sometimes to her reflection in the mirrored closet doors facing her crib and sometimes to her sisters who run to her room to say hello as soon as they hear her little voice. Her gibberish babble fluctuates as though she is actually talking but she doesn’t yet have the words to express herself.

Having the words to express themselves comes in handy for kids – they are finally able to tell us their wants and needs, communicate their emotions and negotiate situations around them. But, having words isn’t always as simple as it sounds. Anytime one of my kids (okay, not the baby but definitely the other two) is having a meltdown, I tell them to take a few deep breaths and find their words to tell me what’s going on. “Use your words,” I tell them. This simple phrase – “use your words” – is a staple among parents. However, it’s also a bit of a joke. In order to have the words, they have to know the words, and therein lies a problem.

A few weeks ago, my husband suggested that we go out to dinner. “YES!” my three year old exclaimed, clearly excited to be out of the house for a meal. After a quick brainstorm, we settled on a burger joint that we hadn’t been to for a while, which is conveniently located next to a burrito place that we’d been to relatively recently. As my husband opened the door to the burger place, the three year old melted down. “NO! This is not out to dinner!” Confused, I scooped her up and asked her what she was talking about. We were at a restaurant…away from our house… out to dinner. But she remained steadfast that this actually not “out to dinner.” As she continued to meltdown, I repeatedly asked her to “use her words” to tell me what was wrong. After a few failed attempts at trying to decipher what she meant (and with patience wearing thin), I had a breakthrough. “THIS is not out to dinner,” she told me while pointing at the burger joint. “THAT is.” Her arm swung so she was pointing squarely at the burrito place. I’d finally gotten to the bottom of the meltdown, and there at the bottom was a clear communication breakdown where her lack of words and our ease of language were in direct combat with each other. She thought that the burrito place was called “Out to Dinner” and so we were simply at the wrong restaurant and thus her expectations were thrown for a loop. She was using her words, but her words just didn’t encompass what they need to in order for us to have a clear line of communication.

It’s not just about having the words, though. I’m quickly learning that while my kids may not always have the words they need to express themselves, having the communication skills to utilize them is ever harder. For example, a few nights ago, my three and five year old girls were arguing during their cool down period before bed. As is typical, the five year old came to me to tell me all the things her sister was doing that bothered her. “Sweetie, you need to work it out with your sister. Use your words and tell her how you’re feeling,” I told her. So, she went back to their room to try to talk it out. However, this devolved quickly, as I overheard (eavesdropped) through the baby monitor in their room.

Five year old: “I feel sad when you tell me that I can’t come to your birthday party. We’re sisters and that means we are best friends too.”

Three year old: “No we’re not. My best friend is at school.”

Five year old: “We both have FRIEND best friends, but we are sisters and sisters come first.”

Five year old: “What? No. That’s not what we are talking about. You are making me feel sad.”

Obviously their communication abilities are on very different wave lengths, which poses a big challenge for “I statements” and honest communication. As much as my five year old had the words she needed to use to express herself and the communication skills she needed to have a conversation about them, my three year old had neither. So simply telling them to use their words isn’t enough. Communication is a fickle little beast – it’s necessary for navigating the world around us and yet without the tools to do so, things devolve quickly. Telling my kids to “use their words” isn’t enough of a solution. I need to help them find, explore and understand the words so that they can then use them effectively, both with each other and with the world around them.

One thought on “Finding the right words, part 1”